Boris is an award-winning writer and director.  He earned BFA and  Post-Graduate degrees in theatre before moving to New York, where he worked as an actor as well as producing and directing several theatrical productions.  Upon moving to Los Angeles, Boris made the switch to film and television.  His first short film as writer/director: Unbreaking Up, screened at multiple festivals, winning an award for drama.  Boris is currently writing, directing and producing a feature-length docu/mocumentary Con Artists — now in post-production, and a feature documentary, Cycles and Revolutions, filming this year.  As an actor, Boris has appeared on numerous TV shows and all levels of film from shorts to studio releases.  More at: www.imdb.me/boris and www.matterdoor.com

As an actor, Konstantin recently appeared on NBC’s My Own Worst Enemy, several short films on the festival circuit, and the upcoming feature Phantoms Deep.  As a producer, he just wrapped a music video for a Russian superstar Anna Sedokova and the award-winning short Just In Case in which he also stars (playing in the 2010 Palm Springs Int’l ShortFest).  Konstantin is currently in pre-production on a stage show (two plays by Vaclav Havel), a feature film, and developing two pilots: one for the US market and another for release in Russia and internationally as writer and producer.  He holds a degree in Theatre and has performed on stages from Minsk to Minneapolis.

Has appeared in countless TV shows and films.  He is currently known for the recurring role of “Smitty” Smith, a young, aspiring copywriter on AMC’s critically-acclaimed Mad Men.  Prior to that, Patrick appeared as one of the leads in National Lampoon’s Dorm Daze and Dorm Daze 2, portraying the half of the goofy stoner duo of Pete and Wang (Paul H. Kim).  He recently appeared in feature films Transylmania and Feed the Fish, and in Slam I Am, now in post-production.

Allison is an award-winning independent film producer currently in production on two web series, a feature film, a short and a PSA, with other projects in development.  Prior to embarking in film making, Allison spent six years with Georgopoulos Design Associates as the Director of Creative Operations, working with such clients as Disney, ABC, Touchstone, Sony, Imagination, Yahoo, and Miramax.   Among other projects at GDA, Allison co-wrote and produced a five-episode pilot cooking show with Yahoo! for their Lifestyles department.  Allison has a BFA from the University of Arizona in Media Arts with an emphasis in film and theatre production.

P.J. Gaynard is a Los Angeles based Director / Director of Photography. He has a BFA in Film, Video, and Animation from the Rochester Institute of Technology. He is the President and Director of Goat Milk Fudge Productions. Over the last few years P.J. has D.P.-ed several webisodes and web series’ including , “The Mercury Men”, “Solo”, “Trading On 15″, “The Life of Kat and McKay”, “The Web Files”, and “iPWN”. PJ has also shot for TVGuide.com, GQ.com, and Blackbookmagazine.com . Although PJ is an atheist and doesn’t believe in heaven, he does believe in “Purgatory, Inc”.﻿ 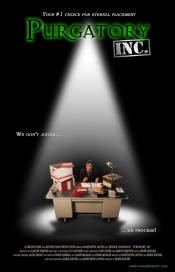