Holt Boggs (Sons of Anarchy, The Prodigy, Jericho) was born and for the most part raised in Houston. Always the class clown, he decided to become an actor for no better reason than it looked like an easy job and hoped to land a gig on some sketch comedy show or a sitcom at best. Holt’s ignorance paid off. After graduatin a two-year conservatory program in Dallas, Holt starred in the critically acclaimed indie thriller The Prodigy which he also co-wrote. He recently completed his third screenplay titled The Wicked Garden and is to start production soon on Sinners and Saints and For the Love of Jade. Unbreaking Up’s director, Boris Kievsky has selflessly vowed to use Holt on every future project regardless if there is a role for him or not. (Director’s note: “I said what??”) Holt is managed by S&J Talent. www.HoltBoggs.com

Nina Avetisova (Date Movie, Sobaka, Law and Order) was born and raised in Russia. Moving to the United States, to pursue acting, Nina first appeared in various stage shows in New York City before making the transition to Los Angeles. In her few years in Los Angeles, Nina has appeared in the feature films Date Movie, Fat Albert, Sobaka, and various television shows. Most recently, Nina completed filming the lead role in the indie feature Phobic. She is also in the process of writing a feature screenplay based on her experiences coming to the United States in the aftermath of the collapse of the Soviet Union. IMDb profile

Konstantin Lavysh was born Konstanin Andreyev in Minsk, Belarus. Konstantin came into this world with two dreams – diplomacy and acting. Having studied and performed on stages from Minsk to Minneapolis, Konstantin attained a Masters degree in International Affairs and established a very successful career in diplomatic sector. As nothing quenched his acting thirst, he came to Los Angeles to establish himself as a screen actor, taking his grandfather’s name of Lavysh as his stage name. Konstantin’s recent projects include My Own Worst Enemy (pilot, NBC), What People (AFI thesis film), among others. As of this writing, Konstantin is filming a dark metaphysical tale of Charon, an independent film. He is also in the process of writing and developing his own projects. He is represented by Red Talent of Beverly Hills (’cause that’s how he rolls). www.konstantin-lavysh.com

Yuri discovered his talent and passion for acting near the end of high school and since then has made a reputation of being a committed and creative artist on both stage and screen internationally. He made his debut in writing, producing and starring in the independent short, “Faithful.” He is a student of martial arts, speaks fluent Japanese, French and German. Yuri is  internationally known for his work in voice over in video games and animation, some of his roles include Superman on “Legion of Super Heroes” (2006), Ben on “Ben 10: Alien Force”, Sasuke on “Naruto” (2002) and The Prince in Prince of Persia: The Sands of Time (2003) (VG) video game series. In 2004, he started his own production company, Monkey Kingdom Productions, with partner Tara Platt. www.yurilowenthal.com

Born in Fairfax, Virginia, Tara grew up all over the country, from Arizona to Oklahoma to Michigan to New York City, finally ending up in LA. Following high school, she studied at the Mason Gross School of the Arts at Rutgers University. While studying in London at the London Academy of Theatre, she performed at the Edinburgh Fringe Festival in Scotland before moving to New York City. Her debut in New York was in Alan Ball’s “Five Women Wearing the Same Dress”. In 2004 she started Monkey Kingdom Productions with partner Yuri Lowenthal. She continues to be seen on stage and screen globally and can be heard in voice over in animation and video games, and is quickly becoming well known for her English dub of Temari on “Naruto” (2002). www.taraplatt.com

Boris is an award-winning writer and director.  He earned BFA and  Post-Graduate degrees in theatre before moving to New York, where he worked as an actor as well as producing and directing several theatrical productions.  Upon moving to Los Angeles, Boris made the switch to film and television.  His first short film as writer/director: Unbreaking Up, screened at multiple festivals, winning an award for drama.  Boris is currently writing, directing and producing a feature-length docu/mocumentary Con Artists — now in post-production, and a feature documentary, Cycles and Revolutions, filming this year.  As an actor, Boris has appeared on numerous TV shows and all levels of film from shorts to studio releases.  More at: www.imdb.me/boris and www.matterdoor.com 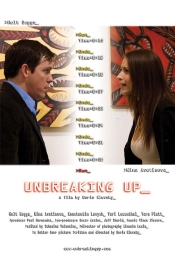