written and directed by Boris Kievsky

The October Revolution promised hope for Russian Jewry. What it delivered was disaster.

The film takes place in two parts over the course of a trip across the former Soviet Union.  The first is the story told by historians, survivors and their descendants, recounting the Jewish participation in the October Revolution and the rise of the Soviet Union.  The second is a personal story, following one family through three generations, exploring the impetus for action, the results of revolution, and the hope for a peaceful place in the world. 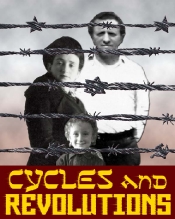